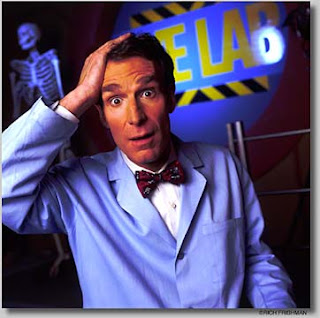 If I were to summarize my experience at the annual National Science Teachers Association (NSTA) conference in San Francisco in one word it would have to be: Overwhelming.

There were hundreds of presentations every day, thousands and thousands of people there, and somehow or another it still felt incredibly informative and personal. Some of the highlights were:

1. Hearing Jeff Goldstein speak about the 'journey of science' and the role that teachers play in this journey. It was incredibly emotional and definitely reenergized me to become the best science teacher I can be. At times during the grind of the year you forget why you wanted to be a science teacher and sometimes you lose sight of your goal - helping students discover the joy of science and unearth their inner scientists. Jeff Goldstein's talk was just what the doctor ordered, so to speak.

Example: True or False. The yolk of a chicken egg is a really large cell nucleus.

4. Project-Based Learning / Inquiry-Based Learning / Project-Based Inquiry Science. It took me forever to figure out what this was exactly - even though everyone was talking about it at the conference - and eventually I just asked someone outright. He told me the definition was quite convoluted at this point and it was more of a working definition, and while all of the above-mentioned terms were different, they were related. Here's the best definition I could find. On the last day of the conference, I went to a round-table discussion on how successful these teaching methods have been in science classrooms and it was revelatory. It seems to make so much sense, I'm not sure why all schools aren't doing this. It definitely requires a lot of work on the front-end, but pays off incredible dividends on the back-end. I am convinced that this is the direction that science needs to take. Even though I was a science major in college, I didn't enjoy science in high school because it didn't appeal to the joy of exploration and joy of problem-solving that I experienced in Williams science classes. This teaching method is the best way to remedy the problem.

Answer to above question: False. A chicken egg is a really large cell, but the yolk is not the nucleus, it is a rich source of nutrients for the developing embryo. The nucleus is actually much, much smaller and located in the yolk.
Posted by Amulya Iyer at 10:43 AM

Amulya Iyer
A first year teacher at The Chinquapin School in Highlands, TX.